This study investigates the dynamics of migratory trajectories from Eritrean refugees’ place of origin to the host communities. The focus is on Eritrean migrants that leave Eritrea through Sudan or Ethiopia and who end up directly, or return eventually to the refugee camps in these countries.

The research looks at four different themes. Firstly, the modus operandi of human traffickers along the route. Secondly, the unaccompanied minors and youth in the refugee camps and their strategies to be resilient and autonomous. Thirdly, the effects of trauma and posttraumatic stress among the refugees and tools to support them. Fourthly, issues regarding livelihood.

On the cover of this policy brief you see a picture of Tesfay (not his real name). When Tesfay fled Eritrea around 2009 he was abducted and trafficked to the Sinai desert where he was severely tortured (picture 1). He was forced by mobile phone to collect a ransom of over 30.000 dollars. His wife Sarah (not her real name), to whom he was married in Eritrea had travelled to Saudi Arabia where she was working under very bad conditions. She collected with other family members the ransom for his release. After his release the Egyptian military captured him and put him in prison. From inside the prison he had to collect money again for his release and transfer to Ethiopia. When he arrived in Ethiopia, he was transferred to the recently established Hitsats refugee camp in the Tigray region. Because this camp was new when he arrived there were no services yet – there was hardly water. The area where Hitsats is located exist out rock, is very dry, and very hot. In the camp there was one tree near the main road. Tesfay realised that on the spot of the tree, there must be water, and he started digging in the ground until he found water. When he reached the water he constructed a well, all by himself. After the well, he built cabins and now, all residents in Hitsats can take a cold shower for a few cents. Sarah, who was still in Saudi Arabia, came to Hitsats to join him in the camp and to help him with the small business.

The story of Tesfay is not a single story. Many refugees have been target to human traffickers or have relatives that have been abducted. Not only abduction and torture outside of Eritrea is familiar among the people, but also severe torture and abduction in Eritrea and by Eritrean government officials is known and leads to fear among the refugees.

These refugees are dealing with trauma and post-traumatic stress (PTS) and live in an environment where treatment or help is minimal or absent. Besides adults, there are many unaccompanied minors in the refugee camps and especially in Hitsats. Between January 2014 and August 2017, 5738 unaccompanied minors arrived there. These minors stay in the camp for years before they decide to leave, to return or to stay. The minors do not apply for resettlement procedures other than family-reunification.

Further issues in refugee camps can be found in a lack livelihood opportunities. There are insufficient means from the organizational side, and the NGOs are facing challenges regarding livelihood support and income generating activities.

The research focus on ICT dimensions of the modus operandi of the human traffickers (i.e. torture by phone and begging for ransom by phone), but also on the role of mobile phones in maintaining relationships and long-distance money collection and transfers. Furthermore, possibilities for trauma  support for refugees via mobile phones are investigated and livelihood programmes and relief opportunities for unaccompanied minors are studied 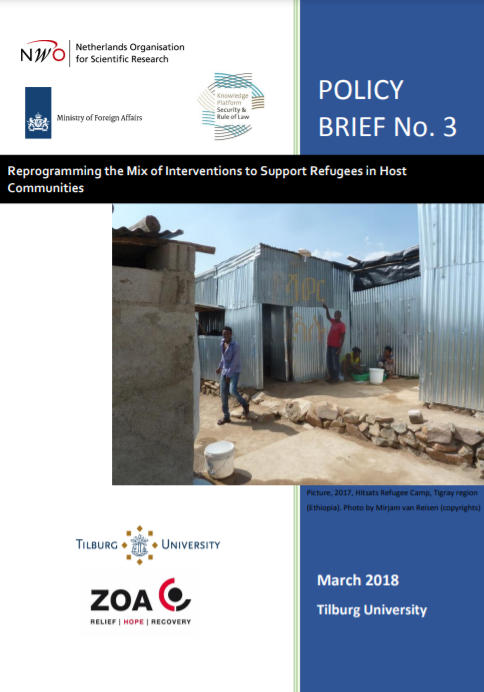