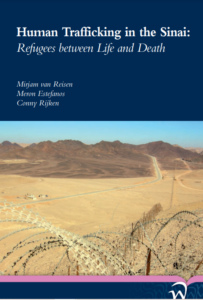 This report describes the horrific situation of trafficking of refugees in the Sinai desert, a crisis that started in 2009. The refugees include men, women, children and accompanying infants fleeing from already desperate circumstances in Eritrea, Ethiopia and Sudan. An estimated 95% of the refugees held as hostages in the Sinai (also referred to as hostages) are Eritreans. Smuggled across borders by middlemen, or kidnapped from refugee camps in Ethiopia and the Sudan as well as their surrounding areas, and then captured or sold, the refugees are held hostage close to the Israeli border in inhumane conditions and tortured for ransoms up to USD 50,000.

The aim of this report is to give the Sinai refugees a voice. Through the interviews we can hear their stories, and connect with them. It is hoped that
this document will raise awareness among the broader public of the desperate plight of these people as a step towards stopping this crime.

This report examines the processes involved in the trafficking of the refugees (i.e., how the refugees are recruited, how they are transported to the Sinai, including their routes, and the conditions under which they are being held) and the international legal framework applicable to these practices (i.e. whether or not these practices can be considered ‘trafficking in persons’, ‘torture’ or other).